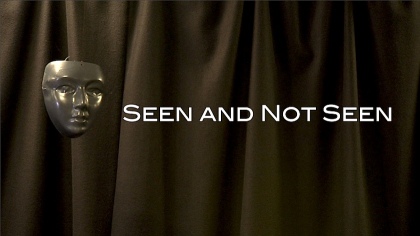 Seen and Not Seen was a projection mapping installation created at Studio 308, Greenwich in September 2013.

During the event visitors were led into the studio in total darkness guided by LEDs to stand in front of a ‘welcome’ sign. The show then consisted of projections on to a screen and on to masks suspended by fishing-line which gave the illusion of faces floating in space.

I’ve always had a deep affection for the Talking Heads song. It may be about someone who seems a bit unhinged, but the themes are pretty deep. On the surface it’s about appearances – about how we superficially look. But underneath lie our anxieties about how we present ourselves to others, and are perceived by them.

The challenge with creating a video of a performance staged in darkness is that you’re forced to show the smoke and mirrors. During the performance the audience stands in the dark and you hide as much as possible from them. The video has to do the opposite. If you were to just record what the audience saw it wouldn’t make a lot of sense to the viewer. Without some context it would appear to be just faces appearing and disappearing against a black background: the viewer, unlike the audience, is not there to experience the magic of it happening around them.

This is common with other videos documenting Projection Mapping installations. They will show the site – perhaps a building – during the day, and then show the performance at night. Without this there is nothing by which to judge scale and tell what’s going on – the show would lack impact. In short, you have to show how it’s done, and do so at the outset.

This project took a lot of work, but I’d love to do it again, and I have several ideas for other subjects and approaches. 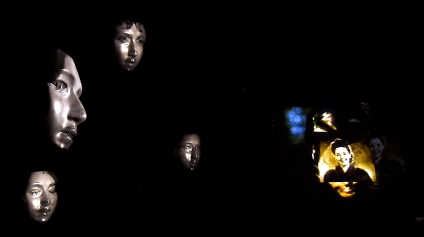